On October 12 and 13, 2012, the KnowledgeCamp took place in Karlsruhe, Germany. It was the first barcamp, or unconference, I attended. For those of you who are not familiar with this type of event, here is the the corresponding Wikipedia article. On one hand, I went because I was curious to see how such a barcamp works. On the other, I wanted to offer a session in order to present and discuss a paper a colleague and myself have been working on recently.

My general impression of the barcamp was very positive. One of the greatest features is the selection of the sessions by the participants themselves. This procedure guarantees that the content offerered is relevant to the people attending the barcamp. While I was worried that my own session may not be suitable for the crowd present, I was pleased to see a number of hands go up once I introduced the topic. Hosts are further free to choose how they conduct their sessions. END_OF_DOCUMENT_TOKEN_TO_BE_REPLACED

Over the past couple of months, I’ve worked on a position paper with a team of people from the German Knowledge Management Association, also called GfWM. The team consisted of practitioners, consultants, and a researcher, with each of us bringing slightly different perspectives to the table. This is not a research paper and our intention was not to write one either. END_OF_DOCUMENT_TOKEN_TO_BE_REPLACED

I’ve commented on the McKinsey Web 2.0 surveys in an earlier blog post. McKinsey just published the outcome of this year’s research, comparing internally networked, externally networked and fully networked organizations. The result: Fully networked organizations perform better in terms of market share and profit margins. Study participants named faster access to knowledge, increased marketing effectiveness and reduced communication costs as some of the main advantages of technology adoption. The authors, Bughin and Chui, also report that more employees within the same organization are now making use of more Web 2.0 technologies compared to previous years. Positive feedback loops seem to facilitate organizational learning. McKinsey predicts that investments in these technologies are bound increase. This is in line with Gartner’s expectations.
There was one finding that I thought was particularly noteworthy: Self-reported market leadership correlated negatively with externally networked organizations. Market leaders tend to focus on internal collaboration, but shield themselves from external ties. The authors of the study suggest that this is to do with maintaining their leadership position. Market challengers, on the contrary, are more focused on external uses of Web 2.0 technologies to win clients over. Would you agree?

I mentioned Andrew McAfee and his book ‘Enterprise 2.0’ in an earlier blog post and would like to come back to him now. In Chapter 4 of his book, Andy introduces the notion of the Enterprise 2.0 Bullseye (see below graph). The logic of the bullseye builds on Granovetter’s (1973) and Burt’s (1992) work on the strength of weak ties and structural holes. Andy argues that the bullseye helps to focus Enterprise 2.0 efforts by distinguishing the different types of ties between people, or employees, and how these ties may be maintained or altered by the use of social software (which he calls ESSPs). Cooperation between close colleagues, or strong ties, may be facilitated by wikis, whereas social network sites are more suitable to maintain a large network of acquaintances, or loose ties. Blogs, in turn, are seen to be enablers for converting potential into actual contacts. Last but not least, there are forms of cooperation, for example in the case of prediction markets, when no tie between actors is present and yet the individuals involved can productively interact. There are a number of other studies that investigate the impact of ICT on social capital, yet Andy manages to match ties and technologies. This is an interesting step forward. 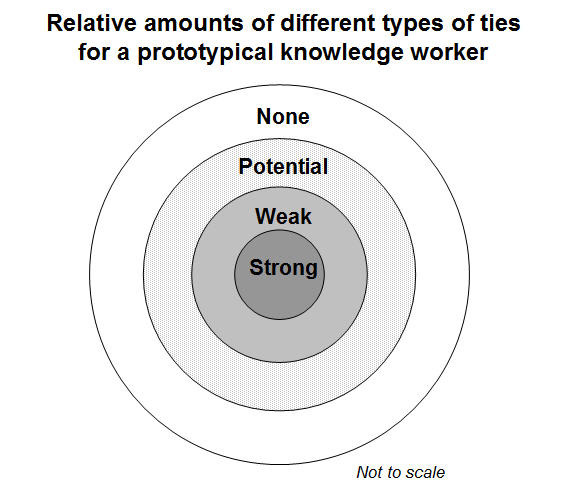